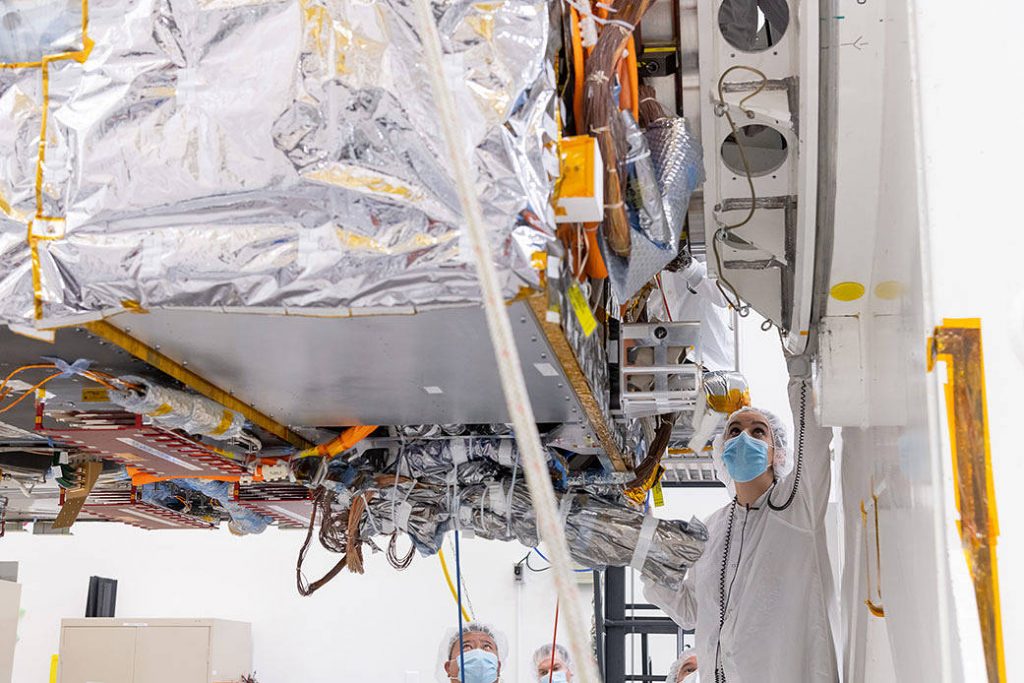 The Solar Electric Propulsion (SEP) Chassis of NASA’s Psyche spacecraft is mounted onto a rotation fixture in High Bay 1 of the Spacecraft Assembly Facility at NASA’s Jet Propulsion Laboratory in Southern California. This photo was taken March 28, 2021, just after the chassis – a major component of the Psyche spacecraft – was delivered to JPL by Maxar Technologies. Maxar’s team in Palo Alto, California, designed and built the chassis, which includes all the primary and secondary structure and the hardware components needed for the high-power electrical system, the propulsion system, the thermal system, guidance and navigation sensors and actuators, and the high-gain antenna. The phase known as assembly test, and launch operations (ATLO) for Psyche is now underway at JPL. In this photo, ATLO Mechanical Lead Michelle Colizzi of JPL oversees the docking of the chassis to the dolly.

Over the next year additional hardware will be added to the spacecraft including the command and data handling system, a power distribution assembly, the X-band telecommunications hardware suite, three science instruments (two imagers, two magnetometers, and a Gamma Ray Neutron Spectrometer), and a deep space optical communications technology demonstrator. The spacecraft will finish assembly and then undergo rigorous checkout and testing, before it’s shipped to NASA’s Kennedy Space Center in Cape Canaveral, Florida, for an August 2022 launch to the main asteroid belt. Psyche will arrive at the metal-rich asteroid of the same name in 2026, orbiting for 21 months to investigate its composition.

Arizona State University in Tempe leads the mission. JPL is responsible for the mission’s overall management, system engineering, integration and testing, and mission operations. For more information about NASA’s Psyche mission, go to: http://www.nasa.gov/psyche or https://psyche.asu.edu/