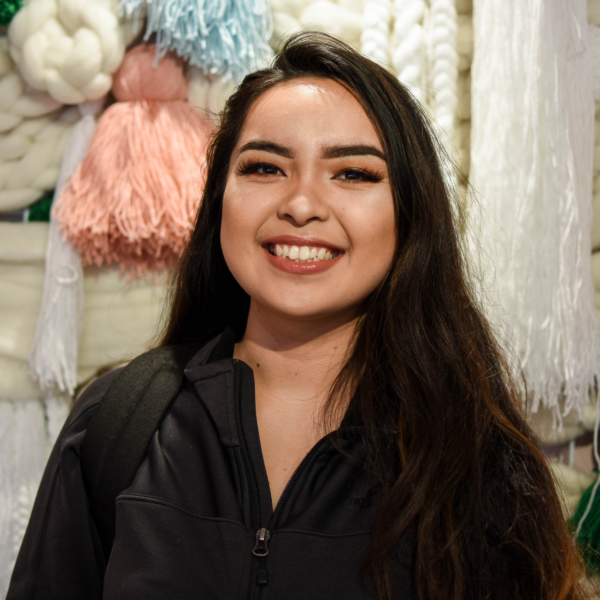 About the work: This ethereal piece illustrates a woman coming into contact with the Psyche asteroid. The woman represents the goddess of the soul, after whom the asteroid was named. She also represents the people that have come together to take part in the Psyche mission. While she is symbolically reaching out to touch the asteroid, we are reaching out into space to investigate this asteroid. This was a fun piece to make as I got to play around with color theory.

About the work: For my third piece, I created a trifold brochure meant to be printed and physically handed out to people at outreach events (such as the Psyche Inspired showcase exhibit) who would like to learn more about the Psyche mission. As a tool for outreach, it is a summarized, compact, colorful, and accessible version of the information that is on the Psyche mission’s website.

About the work: This piece is my artistic rendering of the Greek goddess of the soul, Psyche, after whom the asteroid being investigated was named. Alluding to the Greek mythology aspect of the mission, I included a gold leaf headband and a gold choker necklace as symbolism for the jewelry that the ancient Greeks sometimes wore. Flying above the woman’s head is the Psyche spacecraft that will be launched in 2022. It is surrounded by a blue glow that matches the color of the woman’s pupil-less eyes (pupil-less since the eyes are the window to the soul!). The spacecraft appears to be melting and is bent in a way to suggest dynamism—this movement, in addition to the woman’s suspended hair, represents the progress we are making toward the mission, as well as the actual action of being launched. Most of the colors I used were from the Psyche mission’s official color palette.

About the work:This poster series takes a modern twist on a groovy style and is a play on words from the Psyche mission. Psyche-delic is both a pun and an adjective to describe the style of art and initial idea I had for this project. Both images consist of concentric shapes radiating from the subject (which is either the Psyche spacecraft or asteroid) and use the colors found in the Psyche mission’s color scheme. As a poster that is meant to be seen, I wanted the images to be as eye-catching and scientifically accurate as possible, so I made sure the colors took up a big part of the posters, the text had a stylistic and striking diagonal to them, and that all the details of both the asteroid and the spacecraft were captured through finely painted strokes.