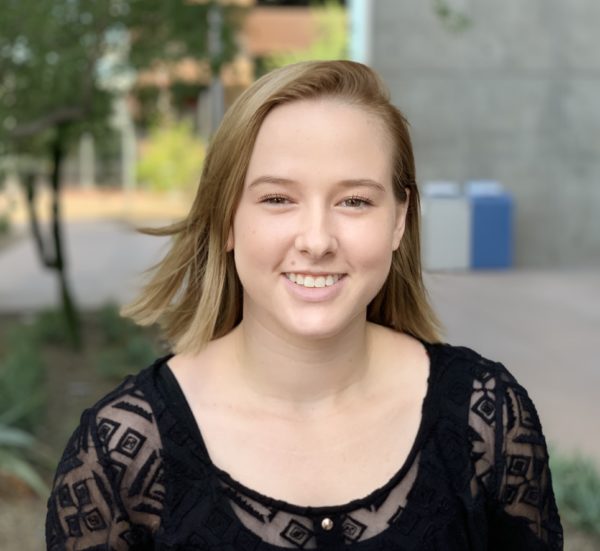 About the work: In learning about Psyche, I’ve learned about vulnerability. I found inspiration not only in Psyche’s story of collision and loss, but also in the community of hope we’ve built around seeing Psyche for the first time. This creative writing piece explores that vulnerability and how we can find ourselves in things that live in our sky.

About the work: I have always loved the way crossword puzzles interact with language. How they serve as a way to learn new words to use to describe the world around us. I think they’re tools that make us think about what words mean and how we use them. In making these crosswords for Psyche, I tried to get in touch with what Psyche might be thinking, yearning for, wanting. In this series, there are poems that I used to try to get in touch with Psyche’s language, and also two crosswords that will help others get to know Psyche better. All of the answers can be found on psyche.asu.edu. Be sure to print them out and try your hand at them if you’d like to get to know Psyche better!

About the work: I think we function in orbits. We circle things all our lives. That’s what these letters to Psyche are about: the way we circle, cycle, to and from the same things. Lily, for example, goes through three phases of an orbit with each set of three letters. The first is isolation. The second is hesitation. The third is association. Engagement. Burrowing into the world instead of, as in the first sections, away from it. Each set of three letters has a repeated line. In the first, it appears early on. In the second, about halfway through. The third features it at the end. These lines change as Lily does. She is dreaming of being lost, then found, and then not dreaming anything at all. A sign of healing, perhaps. It can be easier to talk to things like Psyche instead of other people. Times of struggling. But, as Lily demonstrates, it can’t last forever. Find comfort in things like Psyche, sure. How they parallel your hurt. Your life. Your isolation. But, also, let people in, too. Psyche might have been through a lot, but it can’t talk back. Isolation to hesitation to engagement. You need all three to complete the circle.

Write your own letter

About the work: Psyche: Conversations is a set of one-act plays in which we explore Psyche’s capacity to inspire.