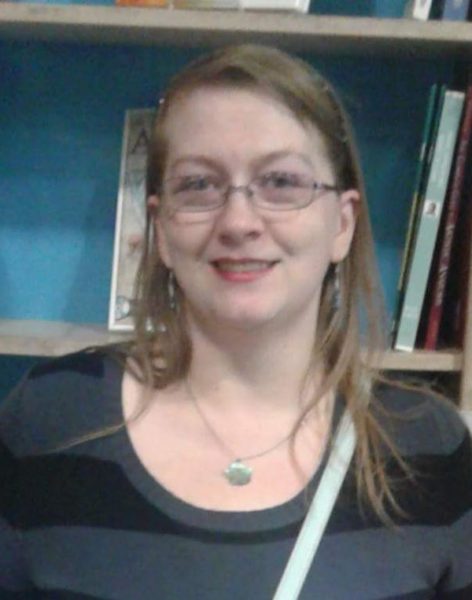 About the work: Beaded Orbits is a mixed media piece measuring two feet by two feet inspired by the information gathered during each phase of orbit by Psyche orbiter. In each corner is one of four medallions representing the four phases of orbits with Psyche in the center of the piece. Each of these symbols and Psyche were hand beaded using seed beads and then attached to a quilt style backing. I chose to design the backing like a small quilt as representation of the dreams that exploring the universe encourage when we are open to all possibilities. All the beaded pieces are about 300 hours worth of combined work that for me, is a nod to all the many hours, days, and years that go into a single mission.

About the work: Voyage is a kinetic sculpture designed to translate the mission and the journey the orbiter will take to collect information from the Psyche asteroid. This piece is a 30”x30”x6” wood housing and is overlaid with a vinyl image of the mission’s trajectory. LED lights each mark an average of 6 months of the orbiter’s time until reaching Psyche. The housing holds three 3D printed Psyche models, which are highlighted with black lights and viewed through holes in their perspective space along the trajectory. When on, the LEDs light up and all the asteroids revolve in sequence and then turn off in a reverse sequence. The initial sequence is meant to convey the orbiter’s journey to Psyche, and the reverse sequence symbolizes the information the orbiter is transmitting back to Earth.

About the work: This piece features five Lexan panels painted to mimic stained glass with the depiction of the Psyche asteroid and her orbiter with Mars and Jupiter framing them on either end. This piece is designed to help viewers understand the location of Psyche and can be installed to give the observers multiple experiences. From one side, the panels are smooth providing a purely visual viewing. When observing from the other side, the panels consist of 3D lines and textured surfaces the viewer can touch. The idea is that one side signifies the preconceived notions about the Psyche Mission while the other epitomizes the varied, new information the Psyche Mission is designed to gather. The reflection each panel casts onto the wall or floor when light passes through them is that of their hazy image, which is a reminder that although we may feel we see things clearly, there is always more knowledge to be gained. The multiple functions this piece can perform symbolizes the many possibilities we are about to learn with the Psyche Mission.