The Psyche spacecraft will rely on a type of electric propulsion known as Hall thrusters in order to propel itself from Earth to the Psyche asteroid. During operation, these thrusters exhaust a hemispherical cloud of plasma known as a plume. Knowledge of the shape and composition of this plume is important in order to understand how well the thruster is operating as well as verify that the plume does not impact (and potentially damage) any sensitive spacecraft components. During ground tests, the plume shape is measured by obtaining measurements at discrete locations, which then need to be analyzed in order to determine an estimate for the plume centroid. The student team applied statistical and machine learning techniques to NASA-provided datasets in order to generate improved regressions and predictions of the plume centroid and implemented these centroid predictions into a 3-D plume visualization. 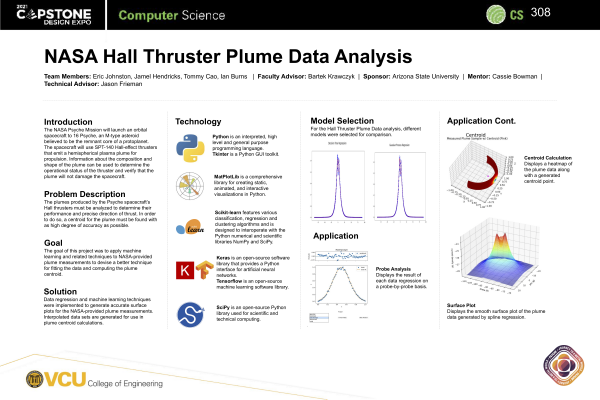 This work was created in partial fulfillment of Virginia Commonwealth University Capstone Courses. The work is a result of the Psyche Student Collaborations component of NASA’s Psyche Mission (https://psyche.asu.edu). “Psyche: A Journey to a Metal World” [Contract number NNM16AA09C] is part of the NASA Discovery Program mission to solar system targets. Trade names and trademarks of ASU and NASA are used in this work for identification only. Their usage does not constitute an official endorsement, either expressed or implied, by Arizona State University or National Aeronautics and Space Administration. The content is solely the responsibility of the authors and does not necessarily represent the official views of ASU or NASA.