The NASA Psyche Mission is set to launch in 2022 and arrive at the asteroid in 2026. It is an orbiter mission and will not land on the surface. It is possible to imagine, however, that after learning about Psyche from orbit, there may be scientists and engineers interested in proposing a subsequent mission to actually land on the asteroid. Designing to the range of hypothesized surfaces and terrain that might be found at Psyche (and keeping in mind other constraints such as its gravity), the team designed a landing system capable of safely landing on the asteroid. 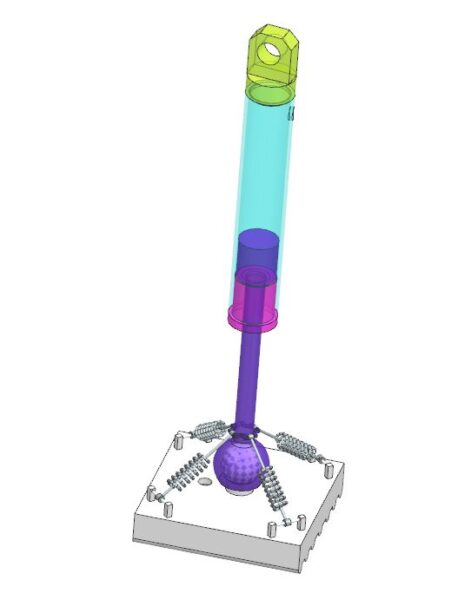 Isometric view of final design of leg and foot

The initial idea for the landing gear system was to use laser-guided hydraulic legs and electromagnetic feet that were connected by a ball-and-socket joint. The material was chosen to be the Aluminum 6061 alloy as it is inexpensive, lightweight, and has high strength in low temperatures. After Finite Element Analysis was performed on the three parts most likely to fail (the foot, the piston and rod, and the tube), it was found that the maximum von Mises stress and the maximum shear stress experienced by both the tube and foot were very low. Because of this, the factors of safety of both parts were extremely high. Since the FEA analysis yielded such high factors of safety for two of the parts most likely to fail, it is likely that using the Aluminum 6061 alloy was one of the best choices for material. With the chosen materials and design, the landing gear system should work with the given constraints on Psyche. The final design of the landing gear system was intended specifically for a surface that is roughly 60% metallic and uneven, and given the results of the analysis, it should work for that hypothesized surface. However, there were several other possible surfaces that Psyche could feature, such as a powdery or fractured surface. As such, a recommendation would be to explore designs that could take more of the possible surfaces into account, as it will be uncertain what actual surface properties Psyche has until more analysis on the asteroid can be done.

This work was created in partial fulfillment of Michigan State University Capstone Course “ME 481”. The work is a result of the Psyche Student Collaborations component of NASA’s Psyche Mission (https://psyche.asu.edu). “Psyche: A Journey to a Metal World” [Contract number NNM16AA09C] is part of the NASA Discovery Program mission to solar system targets. Trade names and trademarks of ASU and NASA are used in this work for identification only. Their usage does not constitute an official endorsement, either expressed or implied, by Arizona State University or National Aeronautics and Space Administration. The content is solely the responsibility of the authors and does not necessarily represent the official views of ASU or NASA.