The mission to explore a metal-rich asteroid is pivoting from planning the details to building real pieces of the spacecraft puzzle.

Psyche, the NASA mission to explore a metal-rock asteroid of the same name, recently passed a crucial milestone that brings it closer to its August 2022 launch date. Now the mission is moving from planning and designing to high-gear manufacturing of the spacecraft hardware that will fly to its target in the main asteroid belt between Mars and Jupiter.

Like all NASA missions, early work on Psyche started with drawing up digital blueprints. Then came the building of engineering models, which were tested and retested to confirm that the systems would do their job in deep space – by operating the spacecraft, taking science data and communicating it back to Earth.

Get the Latest JPL News: Subscribe to the Newsletter »
And the team just sailed through a key stage in that process, the critical design review. That’s when NASA examines the designs for all of the project systems, including the three science instruments and all of the spacecraft engineering subsystems, from telecommunications, propulsion, and power to avionics and the flight computer.

“It’s one of the most intense reviews a mission goes through in its entire life cycle,” said Lindy Elkins-Tanton, who as principal investigator for Psyche leads the overall mission. “And we passed with flying colors. The challenges are not over, and we’re not at the finish line, but we’re running strong.”

Mission scientists and engineers worked together to plan the investigations that will determine what makes up the asteroid Psyche, one of the most intriguing targets in the main asteroid belt. Scientists think that, unlike most other asteroids that are rocky or icy bodies, Psyche is largely metallic iron and nickel – similar to Earth’s core – and could be the heart of an early planet that lost its outer layers.

Since we can’t examine Earth’s core up-close, exploring the asteroid Psyche (about 140 miles, or 226 kilometers, wide) could give valuable insight into how our own planet and others formed.

To that end, the Psyche spacecraft will use a magnetometer to measure the asteroid’s magnetic field. A multispectral imager will capture images of the surface, as well as data about the composition and topography. Spectrometers will analyze the neutrons and gamma rays coming from the surface to reveal the elements that make up the asteroid itself.

The mission team made prototypes and engineering models of the science instruments and many of the spacecraft’s engineering subsystems. These models are manufactured with less expensive materials than those that will fly on the mission; that way they can be thoroughly tested before actual flight hardware is built.

“This is planning on steroids” said Elkins-Tanton, who also is managing director and co-chair of the Interplanetary Initiative at Arizona State University in Tempe. “And it includes trying to understand down to seven or eight levels of detail exactly how everything on the spacecraft has to work together to ensure we can measure our science, gather our data and send all the data back to Earth. The complexity is mind-boggling.” 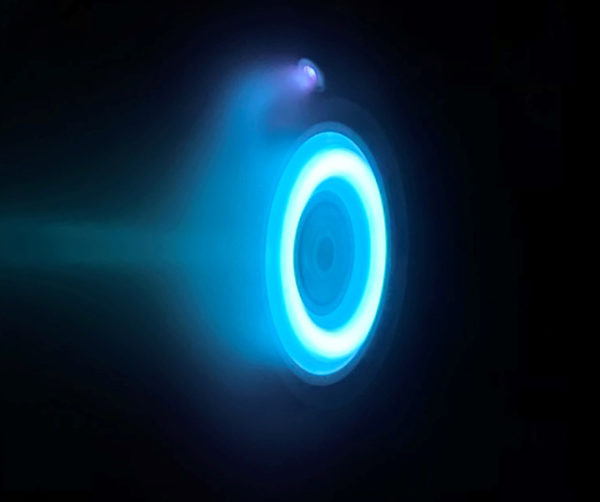 An electric Hall thruster, identical to those that will be used to propel NASA’s Psyche spacecraft, undergoes testing at NASA’s Jet Propulsion Laboratory. The blue glow is produced by the xenon propellant, a neutral gas used in car headlights and plasma TVs.

Now that Psyche is full-speed ahead on building hardware, there’s no time to lose. Assembly and testing of the full spacecraft begins in February 2021, and every instrument – including a laser technology demonstration called Deep Space Optical Communications, led by NASA’s Jet Propulsion Laboratory – has a deadline of April 2021 to be delivered to JPL’s main clean room.

The main body of the spacecraft, called the Solar Electric Propulsion (SEP) Chassis, is already being built at Maxar Technologies in Palo Alto, California. While observing social-distancing requirements for COVID-19 prevention, engineers there are working to attach the propulsion tanks. In February 2021, Maxar will deliver the SEP Chassis to JPL in Southern California and then deliver the solar arrays that provide all of the power for the spacecraft systems a few months later.

Meanwhile, Psyche work is also buzzing at JPL, which manages the mission. Engineers who are essential to perform hands-on work are building and testing electronic components while following COVID-19 safety requirements. The rest of the JPL team is working remotely.

JPL provides the avionics subsystem, which includes Psyche’s flight computer – the brain of the spacecraft. With equipment spread out on racks in a clean room, engineers test each piece before integrating it with the next. Once everything is connected, they test the full system with the software, operating the electronics exactly as they will be used in flight.

“One of the things we pride ourselves on in these deep-space missions is the reliability of the hardware,” said Psyche Project Manager Henry Stone of JPL. “The integrated system is so sophisticated that comprehensive testing is critical. You do robustness tests, stress tests, as much testing as you can – over and above.

“You want to expose and correct every problem and bug now. Because after launch, you cannot go fix the hardware.”

Next up for Psyche: that February 2021 deadline to start assembly, test and launch operations, aka ATLO.

“I get goosebumps – absolutely,” Stone said. “When we get to that point, you’ve made it through a huge phase, because you know you’ve done enough prototyping and testing. You’re going to have a spacecraft that should work.”

More About the Mission

For more information about NASA’s Psyche mission go to: