This artist’s conception shows the Psyche spacecraft near the surface of the Psyche asteroid. Image Credit: Maxar/ASU/Peter Rubin

The very first meeting I went to in my first job out of school was a “configuration meeting” (an engineering design meeting) for a huge telecommunications satellite called Multi-Media Asia. A big group, about 15 engineers, stood around a table covered by big sheets of paper — three foot by four foot “E-size drawings” — that showed the proposed layout of equipment on the main side panels of the spacecraft. The satellite had a large payload with a lot of electronic boxes, and to the untrained eye, it looked like the boxes would never fit on the panel. The lead mechanical engineer spent the hour pointing at the drawings saying things like “we need more room to run the wire harness there; move that box three inches to the right” or “turn those boxes sideways to distribute the thermal load.” To me, it seemed like magic; somehow the lead engineer had a virtual list in his head of all the different constraints on the design and was magically applying experience and intuition in concert to get everything to fit at the same time. It was incredible to watch, and I wondered then if I would ever be able to do that.

Eighteen years later, Peter Lord (now Psyche Technical Director at Maxar), Dan Goebel (now Psyche Spacecraft Chief Engineer at the Jet Propulsion Laboratory [JPL]) and I were standing in front of a blank whiteboard in my office trying to figure out what the Psyche spacecraft should look like. We were starting from a clean sheet and needed to figure out where we should put pretty much everything on the spacecraft. It was our turn to apply our experience; our chance to create a design that made sense for a brand-new spacecraft that would do groundbreaking science at an asteroid unlike any other in the solar system.

We knew we were starting from the basic design of a Space Systems/Loral’s (now called Maxar) Earth orbiting communications satellite. The main structure is a box built around a central cylinder with two solar arrays that deploy from opposite sides of the spacecraft and spin around a central axis to point at the Sun. Most of the electronics in the payload is mounted directly on the two sides of the box that lie perpendicular to the deployed array, called the +Y and -Y panels. These sides serve double duty as mounting panels and thermal radiators; because they lie perpendicular to the solar array, when the array is pointed directly at the Sun, the panels point directly at deep space. This is ideal for getting rid of heat from onboard electronics. Psyche’s electronics would have to go in the same place.

But in addition, we knew that we had to fit in two cameras, a gamma-ray neutron spectrometer (GRNS) to measure Psyche’s composition, a magnetometer to measure Psyche’s magnetic field, an X-band radio antenna to communicate with Earth, and a deep space optical communications terminal (DSOC) with a laser that also needed to be able to point at the Earth. The question was: where to put them all?

Placing equipment on a spacecraft requires a delicate balance to ensure that each piece can fulfill its vital role for the mission. There were an infinite number of possibilities, but we had to start somewhere, so we began making decisions based on our experience and our understanding of where things want to be on the spacecraft.

First came the big two-meter X-band radio antenna. To transmit data effectively, the antenna needs to be as large as possible while still fitting within the launch vehicle fairing. We knew that JPL, based on lessons learned from previous missions, tries to avoid deployable antennas whenever possible. There would be no room in the fairing for a fixed antenna on the side of the spacecraft, meaning it would have to go up on top on the “+Z” deck. So that’s where we drew it. 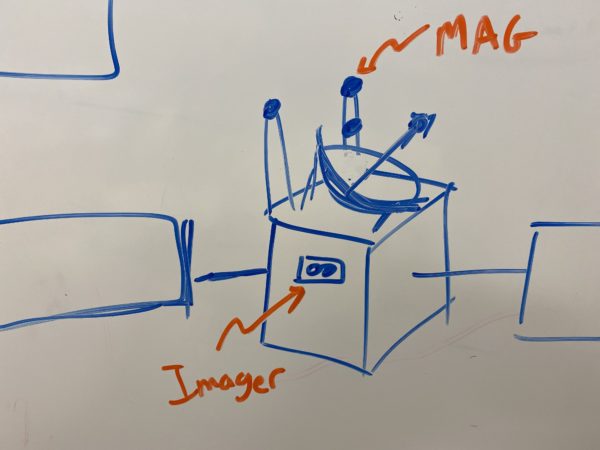 Psyche’s Configuration Began as Ideas on a Whiteboard (2014 — recreated) 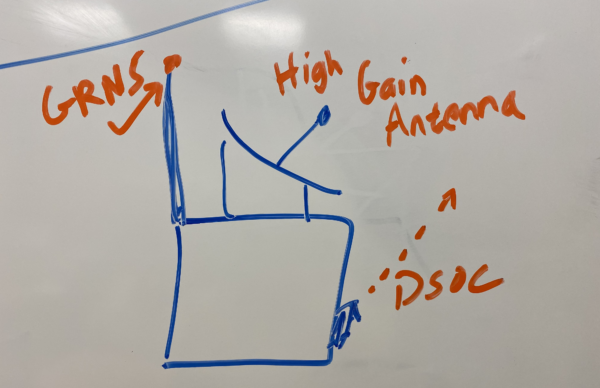 Psyche’s Configuration Began as Ideas on a Whiteboard (2014 — recreated)

To avoid signal interference during science measurements, the magnetometer and GRNS both want to be placed far away from the main body of the spacecraft. Mounting them on deployable booms, we could have placed them six or ten meters away, but every deployment introduces another opportunity for failure. For simplicity, it seemed best to try to get away with fixed booms if we could. The one place we might be able to fit a long, fixed boom was also on the top of the spacecraft. We wanted to make the booms at least 2 meters long — about a body length away. We drew two long sticks next to the antenna and asked the configuration engineers to put the instruments on top of them and make them as long as they could be while still fitting inside the fairing. The antenna took up a lot of space, of course, so we had to put the booms on the corners where there was ample room to mount them.

Next up, where to put DSOC? Well, the DSOC terminal serves the same purpose as a radio antenna; providing a portal for communications to Earth. Maxar’s engineers typically put deployable antennas on the +X and -X sides of their communications satellites, mounting them directly to stable points on the central cylinder. On Psyche, however, the +X and -X sides were mostly empty, so the mounting points were an ideal place to put an optically stable platform for the DSOC terminal. Then, by tilting both the terminal and the antenna a little bit to the side, they could be “co-aligned,” allowing both to point to the Earth at the same time. Was this required? Technically not, but intuitively it seemed like a good idea to be able to use both at the same time, so we went with it. Tilting the antenna a few degrees also created more clearance for the instrument booms and directed the telecom antenna’s radio waves away from the instruments. Seemed like a win-win-win, so we went with that as well.

Finally we were left with the question of where to put the cameras. The spacecraft had to carry two for redundancy — if we only carried one and it failed in flight there would be no ability to map the surface of Psyche. There was one side of the spacecraft left with no instruments on it, the X panel opposite from DSOC. We decided to put a small hole in the side panel for the camera lenses to stick out of the main body, and then we could mount the cameras directly to a stable platform on the central cylinder. The one weird thing was that when flying around the asteroid with the lenses pointing down at the surface, the spacecraft would look like it was flying sideways like an airplane rather than “top down” like a communications satellite. This took some thought, but it turned out mostly to be a matter of aesthetics. We played with some cardboard models and figured out that by pivoting the spacecraft about the axis of the camera lens, we could still point the solar arrays at the sun while imaging the surface at any point in the orbit. That looked like it would work! 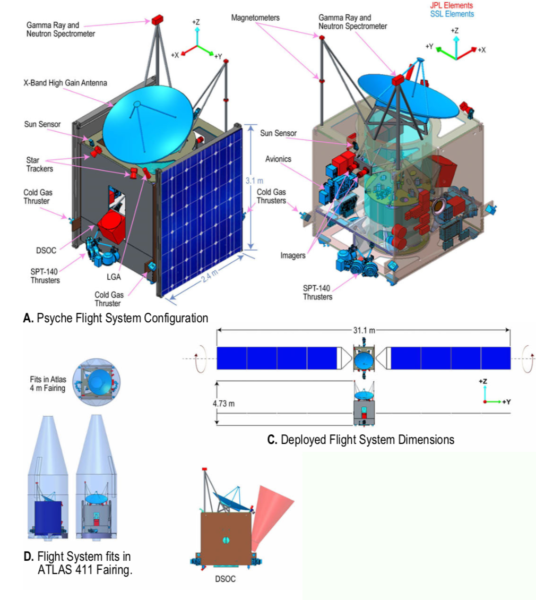 Psyche Spacecraft as Originally Proposed in 2015

So we started with a few ideas drawn on a white board and gave them to the configuration engineers to see if it all fit together. Fast forward to today, and after six years of detailed engineering work, the Psyche spacecraft configuration still looks basically the same! The angle of the antenna has changed a little, but it is still tilted to the side and co-aligned with DSOC. And the GRNS and magnetometer are still mounted on fixed booms that are 2 meters high off the spacecraft deck.

Is the configuration perfect? No, we’ve certainly had challenges dealing with the thermal environment for DSOC and the vibration/shock environments for the cameras and GRNS. But on balance, we made a bunch of decisions based on experience, intuition, and luck and ended up with a configuration that does a good job balancing all the different needs of the various systems on the spacecraft.

And what about the distinctive cross-style five-panel solar arrays that make the Psyche spacecraft so iconic? It turns out those were not in the original design at all. In the original proposal to NASA, two straight wing four-panel solar arrays provided enough power (17 kW) to get to the asteroid with a launch in 2021. After we were selected, NASA asked us to look for a launch period in 2022, and it was then that we found that if we increased the size of the solar array to five panels (21 kW!), we could launch in 2022, cut a year of cruise time off the trajectory, and arrive a few months earlier than if we launched in 2021! Fortunately, Maxar has launched dozens of spacecraft with five, and even six, panel solar arrays into space, so we adopted their existing cross-shaped five-panel design for Psyche. Another win-win! 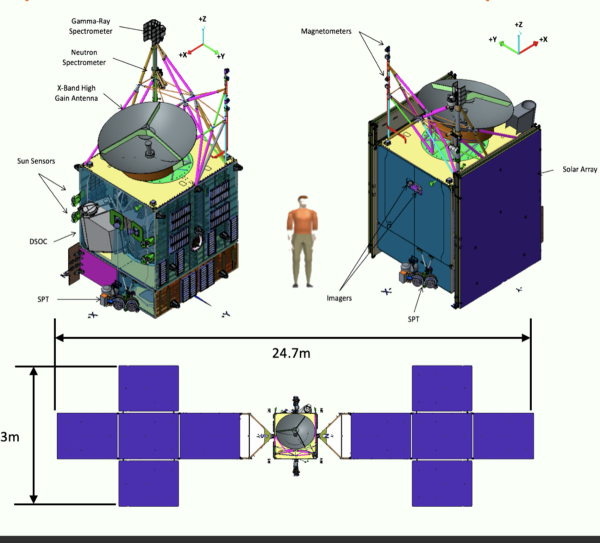 And with that we come full circle. It turns out that I did eventually get the chance to design a whole spacecraft, same as that lead mechanical engineer I saw so many years ago. Soon that design will be reality. The main structure has already been constructed, and most of the rest of the spacecraft will come together this year. What started as a sketch on a whiteboard will soon have its chance to fly!

David Oh is the Lead Systems Engineer and Engineering Technical Authority for the Psyche mission. He has been part of the Psyche team since 2014 and helped lead the original Psyche mission proposal team.