I remember vividly the raw, visceral emotions of seeing ultrasound images of my son and daughter long before they were born. It felt like getting a glimpse behind the scenes as something truly special and unique was taking shape, preparing to one day burst forth and change the world. I still get goosebumps thinking back on those times…

A bunch of us on the Psyche team had another goosebump-worthy moment recently during our semi-annual team meeting, hosted by our colleagues at Maxar Technologies in Palo Alto, California. Maxar (formerly SSL) is building the Psyche spacecraft for us at their facility there. At the end of the meeting, our Maxar friends took team members on a tour of their facilities and of the first pieces being built of the actual spacecraft that will travel on the long voyage to the asteroid that it is named after.

There are certain magic words and phrases that can elicit strong emotional and even devotional responses among afficianados of various disciplines and crafts. Stradivarius. Omakase. Game Seven. And my favorite: Flight Hardware. Flight hardware! Instruments, components, structures, wires, nuts, and bolts that will become part of a spacecraft that will be rocketed into space — deep space — and help reveal the mysteries of the Cosmos. Flight hardware, especially flight hardware that’s never coming back to the Earth, elicits deep, almost religious feelings in me and many of my planetary science colleagues. This STUFF, this LUCKY STUFF, is going on an incredible journey that I wish *I* could go on!

As part of our tour we saw the Psyche spacecraft’s central cylinder and its top, middle, and bottom deck panels, some of the struts that support the spacecraft structure, as well as the housing that will hold the tanks of Xenon gas that fuel the Solar Electric Propulsion engines that will propel us out to our rendezvous deep in the Main Asteroid Belt. 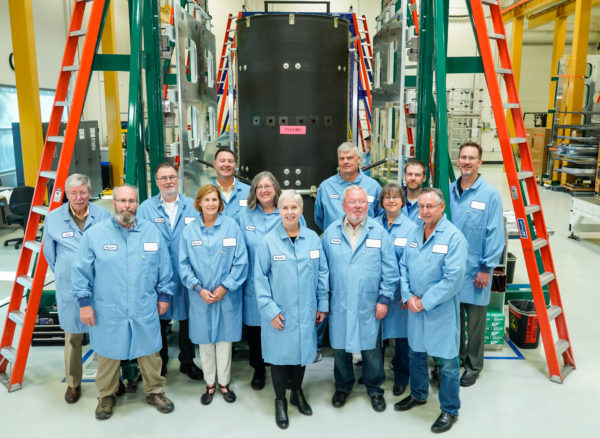 It’s not yet a fully formed spacecraft, but what we saw were lots of the behind the scenes building blocks, the first pieces of a special, unique, and (to us) magical machine that is now taking shape and that will soon burst forth — off this planet — and change the world. No wonder I had goosebumps…

Jim Bell is the Deputy P.I. of the Psyche mission, and the Instrument Lead for the Psyche Multispectral Imager, the main eyes of the spacecraft. He is a professor in the ASU School of Earth and Space Exploration, President of The Planetary Society, and an author of numerous books and magazine articles about space exploration.