High-velocity impact experiments in support of the Psyche mission

At the time of the Psyche mission selection, NASA officials asked us, “Is the science team ready to interpret the geology of a metallic asteroid?”

Psyche is thought to be a metal-rich asteroid. Asteroid surfaces are primarily shaped by collisions with other asteroids, or occasionally with comets. These catastrophic events dig craters into their surface.

One of the first steps in understanding the geology of Psyche was for the Psyche science team to find out more about collisions and crater formation on metallic asteroids. But this is easier said than done, because we can’t really simulate asteroid collisions in the lab. The issue is twofold. First, the crater-forming asteroids are hundreds of meters across or larger, and Psyche has a mean diameter of about 224-km (139 miles). Second, asteroids smash into each other at very high velocity, typically about 5 km/s (11,000 mph) and the energy associated with these events would easily blow up any lab! So to simulate the process of cratering, we needed to scale-down in energy.

Luckily, NASA’s Ames Vertical Gun Range (AVGR) is the perfect facility for the kind of impact experiments we needed to conduct to learn more about collisions and crater formations on metallic asteroids.

This sophisticated facility, built in the 60’s in support of the Apollo missions to the Moon, allows scientists to shoot small spherical projectiles into targets of varying compositions and sizes, and most importantly, under controlled conditions. That means that impact conditions, like impact velocity and geometry, can be adjusted. AVGR can achieve velocities up to 7 km/s (16,000 mph), comparable to those in space.

The limitation, of course, is that projectiles are typically very small, only up to a 1 cm (0.4”). For our experiments, we needed targets with compositions that were a good approximation to that of Psyche. Since we don’t yet know exactly what Psyche’s composition is, we used iron-nickel meteorites and manufactured iron-nickel ingots (these are more expendable and can be a good proxy for expensive meteorites).

Armed with a good selection of targets and a clear plan of action, my team and I went to NASA AVGR to perform a number of impact experiments.

At this facility, a very meticulous set-up is required. First, the gun needs to be dismantled, thoroughly cleaned, and reassembled to avoid dust that could jam the system. Then, the projectile is inserted into the breech, and, finally, the gunpowder is loaded. This is a critical step as the amount of gunpowder controls the projectile velocity that we need for the experiment.

The gun is then operated from a small control room, which is adjacent to where the experiment is being conducted. The experiment is monitored via a system of high-speed imaging cameras, which can record up to 1,000,000 frames per second and which record the outcome of the collisions in real time. Here an imaging technician receives the high speed recordings and fine tune image quality to obtain the final, saved product. 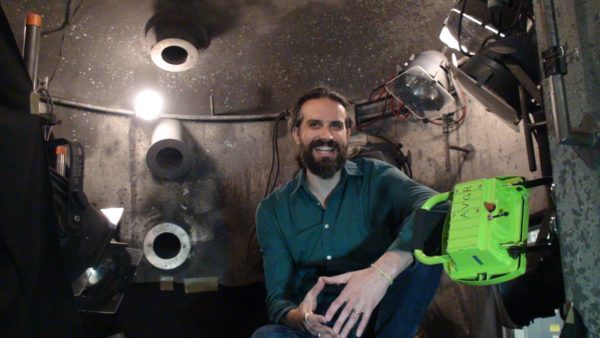 Simone Marchi cleaning the AVGR chamber after an impact experiment.

When we are ready to fire the gun, with the target secured in place, the impact chamber is pumped down to a low pressure of about 1/10000th that of the atmosphere. The gun operator calls the countdown from the back room. No matter how many experiments I have done, I always find this to be a very exciting moment.

“3…2…1, ready, here it goes,’’ we hear the operator’s voice from the AV system. Then we hear a loud and low-pitched sound and we know the gun has fired. Then, the first images of the experiment arrive on the control monitors, and if all goes well, scientists and operators shout out “hurray”. A crater was formed.

The high speed recordings we can see on our monitors from the control room reveal the initial projectile-target contact and ensuing explosion. Streams of vapor and molten metallic droplets are ejected in a characteristic cone-shaped fan. About 20 milliseconds after the contact a glowing crater emerges from the debris curtain. Within a few seconds all is settled and done. It is now time to retrieve the target from the chamber and prepare for the next experiment. 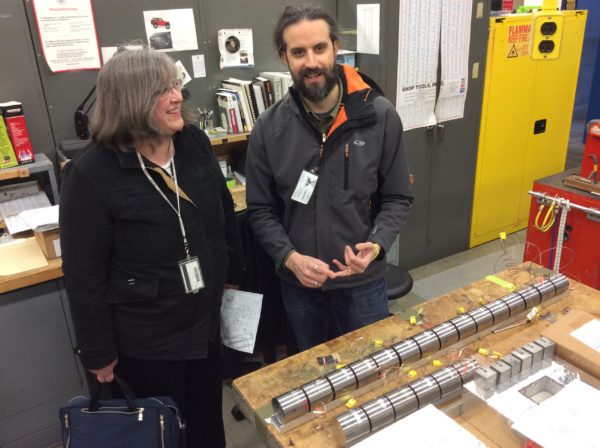 Simone Marchi and Carol Polanskey preparing for experiments at the AVGR.

While these experiments can only produce small craters compared to what the science team will see on the asteroid Psyche, they hold precious information about the overall cratering process that we can use to further understand and interpret the geology of this metallic asteroid. So far, our experiments have revealed complex morphologies that are unlike the typical outcome of cratering experiments in rocky targets, with deeper craters, rugged interiors, and razor-sharp rims.

I can’t wait to see what the asteroid Psyche looks like when we arrive in 2026 and whether its surface will resemble the little craters formed in our experiments here on Earth. 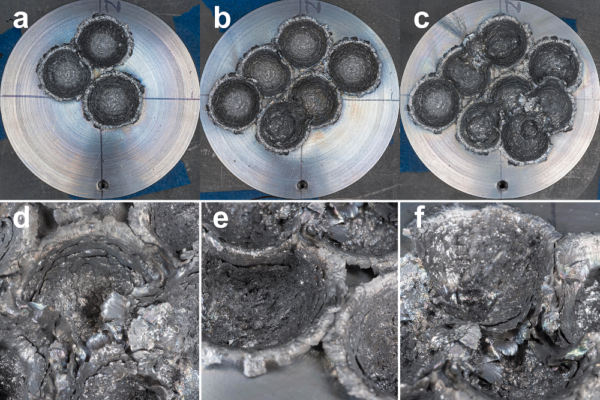 Evolution of morphology for consecutive impacts onto one of the iron-nickel ingots (a-c), and close-up views of interesting features (d-f). The petal structure of adjacent craters interact to form a complex intersecting pattern. Superposition of craters produces a large topographic excursion due to the high strength of the metal.