My Journey to Psyche

I was born with muscular dystrophy, a disease that gradually deteriorates my muscle in stages throughout my life. I thought that it would one day limit what I am able to do. This spurred an interest in academic fields, namely science. I decided that if I couldn’t rely on my body, I would rely on my mind — just as my grandfather had done while living with the same disability that I have.

My grandfather was both my inspiration and a reminder of what I feared. He was an engineer at Boeing for 45 years, despite not having any use of his hands or legs. Even though he couldn’t use tools himself, he was a valuable member of any team he was on. He knew his weaknesses and pushed past them using other strengths to do what he loved, never allowing himself to be limited by his disability. 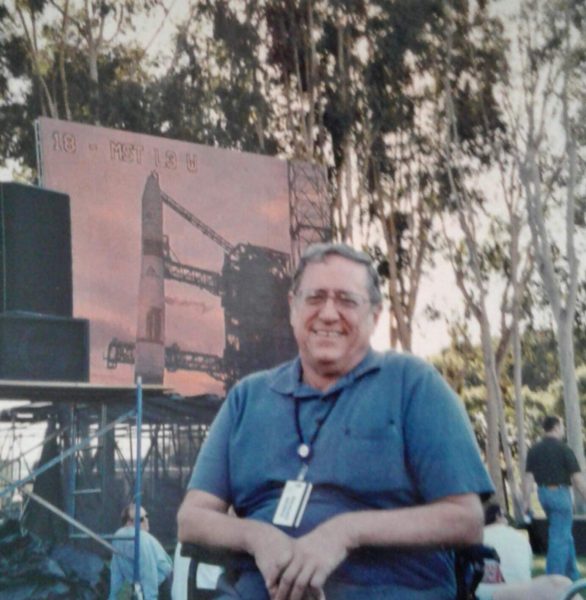 (My grandfather, Harold Chase, at the launch of Delta 2)

I didn’t notice it at the time, but I was preparing for my handicap as if it were inevitable instead of just a possibility. Attempting to maintain a level of mental prowess in the face of the physical disability that may befall me, I retreated into my studies and became isolated. In attempts to ensure my future in the face of my disability, I limited myself before it ever had the chance. Even by middle school I would often be invited to go out but would choose to stay home instead. Eventually the invitations stopped.

On the positive side, as I grew, so did my understanding of the sciences that I was studying. I delved deeper into the subjects of my fascination and expanded my knowledge. I learned of new connections and expanded my world through my studies. At least, that’s what I thought at the time. I had yet to realize that I was gaining knowledge at the expense of wisdom. I had yet to realize the actual reason for my focus on studies. I wasn’t thinking about using this information to make a living or anything for school at the time. I complacently sought knowledge without acknowledging the reason at the core of my intrigue.

I grew enamored with an array of topics, especially space and biology. Two separate topics that may appear to some to have little in common, but the seemingly endless possibilities of both subjects fascinated me. There was always something new to learn and always a new connection to be made. Looking back on it now, what really intrigued me about these fields was all the ways that everything is connected. How the smallest organism can affect an entire ecosystem, how objects separated by vast distances could affect one another, like the Moon and the Earth. I wasn’t really sure why this interested me, but then again, I don’t think I really cared. All I knew was that I enjoyed my studies and that’s all I needed to know to continue. As I grew older, I continued to isolate myself in my studies.

Eventually, I came to realize that the reason I enjoyed learning of the scientific connections around me was because I was alone. I didn’t know how much my solitude impacted me until I needed help and there was no one there to give it. I lost my home. I didn’t have anywhere to go or anyone to help me. It quickly taught me how important relationships to those around you are. I’m not ashamed of my time on the streets — I’m proud that it propelled me to where I am today. It was a major part of my life that taught me a lot and led me to Phoenix, AZ and back into college.

Realizing I had blinded myself to the reality that I was learning of the connections around me instead of making connections of my own, I was finally able to make steps to correct the problem that I didn’t even know I had. While maintaining a healthy interest in my studies, I worked to become more sociable. I finally decided to stop isolating myself.

I decided to adopt a new attitude and make one small change. Instead of spurning opportunities as they arose, I started saying yes as often as I could. I joined clubs at my college, I went out and made friends, and I started making connections. As I made more connections, more opportunities began to present themselves. Looking at reasons beneath my actions allowed me to grow and led to more possibilities than I could have ever found when I was alone. I was eventually told about another opportunity that seemed interesting, the Psyche Inspired internship.

When I heard that there was a space mission to what could possibly have been the core of a protoplanet, I knew that I needed to learn more about it. Although it’s only a prediction that the (16) Psyche asteroid is actually the core of a protoplanet, the possibility ignited my curiosity. I found a new thing to study, but this time I’m not alone. I met the other Psyche Inspired interns and my world expanded.

For the first time, my focus is on a different side of the science; instead of just learning facts, I’m working with the rest of the Psyche Inspired interns to educate and engage the public in the study of Psyche. I have always focused on the accumulation of knowledge, but I never stopped to think of what the point of that knowledge was. Now I think the best reason to accumulate knowledge is to share it, and that Psyche is the perfect place for me to start doing just that.

Looking under the surface, to the core of my own actions, led me to be a part of a mission that is studying what could possibly be the core of an early planet! If you had the chance to peer into your own core, wouldn’t you? One thing that I have learned is that there are more connections within the universe, our planet and ourselves than we can imagine. If there’s even a chance that I can be a part of learning about something as central as the core of our home planet, something truly connected to every part of a world, I want my first step to be sharing even the little that I know.