My first exploration of an “all-metal” world was in seventh grade. It started with Iced Earth and Testament, but I quickly found a favorite with Metallica’s “Wherever I May Roam.” Little did I know, I’d be contributing in two different ways to a “heavy metal” NASA mission that would send a probe roaming through space.

Psyche, the perfect pair: (1) the name of an asteroid orbiting the Sun in the Asteroid Belt, (2) the name of an ASU mission chosen by NASA to visit that asteroid and the name of the spacecraft to be used in the mission. The Psyche Mission is the first scientific exploration of an all-metal world. The mission team seeks to determine whether Psyche is really a protoplanetary core, how old it is, whether it formed in similar ways to the Earth’s core, and what its surface is like.

This artist’s conception shows the Psyche spacecraft near the surface of the Psyche asteroid. Image Credit: SSL/ASU/Peter Rubin

One of NASA’s goals identified in their 2014 Strategic Plan is to serve the American public and accomplish the Mission by effectively managing people, technical capabilities, and infrastructure. To this end, NASA engages the public in its missions and discoveries in many different ways. Developing a mobile app for the Psyche Mission would provide the public with a look inside the mission from beginning to end.

Arizona State University, lead of the Psyche Mission, has tasked five interdisciplinary teams of computer science, graphic design, and engineering management students to develop the app, and I’m part of one of them! Distinct from the Psyche website, the app will engage the user in exploring the excitement and innovation of the mission. In April 2018, the teams will present their app designs to a panel of judges, who will rank the designs based on predetermined deliverables and acceptance criteria.

As an engineering management student, my role is to be a project manager for the team. The first order of business was team bonding. I believe you cannot effectively collaborate with colleagues until you respect and trust them. At our first meeting, we cast away formal introductions in favor of a game. I found a list of 100 first date questions. My teammates and I took turns selecting random numbers between 1 and 100, and answering the corresponding questions. I learned a teammate’s pet peeve, and another’s favorite brand of chocolate. When I had to share my most embarrassing story, I was nervous and ashamed, but the experience was an important reminder that our fear of being vulnerable is what makes us human. We are not code monkeys. We are not calculators. We make mistakes. We juggle student life with work, family, friends, and personal interests. We are a team that supports one another. 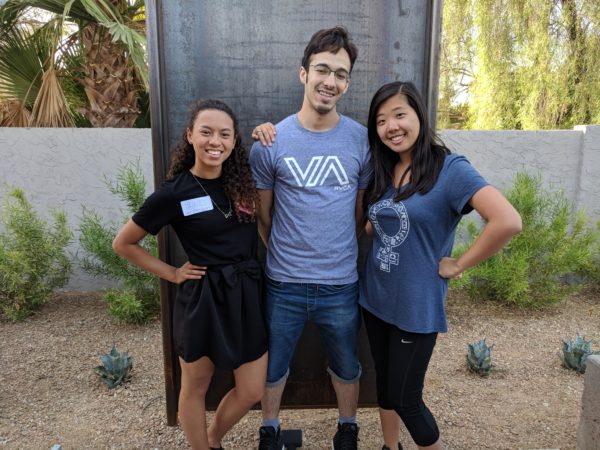 After a first semester of storming the brain, countless hours spent in Microsoft Project and Excel, and many a late night with XCode, I learned:

But being a project manager for one of the mobile app teams is not the only way I’m participating in the Psyche mission. I’m also able to use my creativity to inspire others the way I was inspired when I was young.

Every day in first grade, I would stare at the coveted plastic bin full of prizes, only to be touched by Mrs. Simpson and the chosen one. I had my eye on the “Facts About Space” book, the only book in the bin. It was the last week of first grade, and I was finally Student of the Week. I snatched the book, and didn’t put it down all summer. For my seventh birthday, my parents gifted me a light up board with the solar system, two exoplanets, and a glowy E.T. I could press buttons to hear space facts, and even play games to test my knowledge. Best gift ever! In third grade, I saw a picture of Mae Jemison in my science textbook, the first African-American woman to go to space. She was the first person I saw who looked like me and was living my dream. Jemison became my first role model. I understand that minority women represent a microscopic percentage of future scientists and engineers, so I am radically driven to use my experiences to inspire others to join a relentless pursuit of changing our world.

The Psyche Inspired internship is an opportunity for me to share my Mission experience. Psyche Inspired is a program that brings undergraduate students from any discipline or major together to share the excitement, innovation, and scientific and engineering content of NASA’s Psyche mission with the public in new ways through artistic and creative works.

This fall, I left my comfort zone and found myself in the paint aisle of Michael’s, re-reading labels to discern the difference between “metallic black” and “shiny black.” My first art piece was a collaborative project with an art student, Chris Vasquez. Together, we created a papier mache replica of the Psyche asteroid. Chris built the framework using chicken wire, and started the first layer with foam. I helped paste layers of paper over the skeleton, coating my hands and my favorite engineering t-shirt in ice cold-feeling (but probably room-temperature) modge podge. After all glue coats were dried, Chris and I added a base coat of black paint to the asteroid. Then, he used the metallics to adorn Psyche with her beauty marks, giving special attention to her peaks, divots, and curves in all the right places. Our Psyche model shimmers proudly on display wherever she goes, truly a rival to Venus.

In preparation for ASU homecoming, I was tasked with creating coloring sheets for children. I’ve had GIMP installed on my laptop for two years, and never used it until now. With the help of Google and some online tutorials, I rendered outlines of the Psyche logo and the artist’s depiction of the asteroid. At the ASU School of Earth and Space Exploration (SESE) booth, children and adults alike were thrilled with the coloring sheet. It’s a tangible piece of the Mission they can engage with. To be honest, I have my own coloring sheets decorating my fridge. 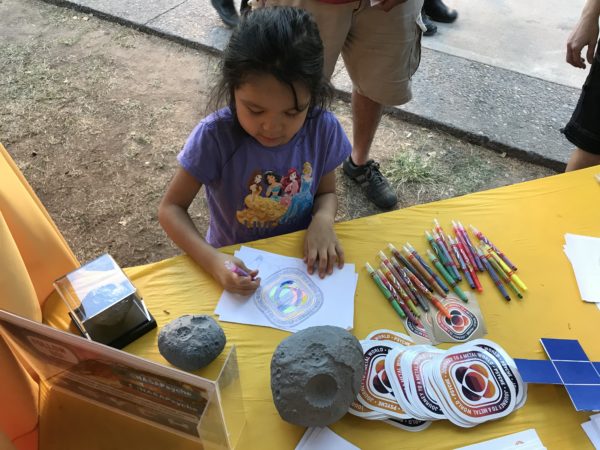 For my next piece, I followed in the oddly-shaped footsteps of Weird Al Yankovic, and recreated a song. I chose a nursery rhyme because they’re usually shorter than most songs, which makes them easier to work with. Nursery tunes are also well-known across all ages — I’d have a wider audience that could sing my song. I rewrote “Twinkle, Twinkle, Little Star” as “Beep, Boop, Beep, Boop, Asteroid.” It took me a few afternoons to find the perfect words to satisfy the number of syllables per line, but now I have an adorable space lullaby to sing to my future astro-children.

“The visions we offer our children shape the future. It matters what those dreams are. Often they become self-fulfilling prophecies. Dreams are maps.” — Carl Sagan, Pale Blue Dot: A Vision of the Human Future in Space.

Psyche Inspired tugs on the strings of creativity inside me, revealing a treasure map of endless opportunities for innovation and exploration.