How do the Electric Thrusters on the Psyche Spacecraft Work?

We’ve all seen the impressive images and videos of shuttle and spacecraft launches, where huge rockets use the combustion of liquids and of solid propellants to produce the incredible amounts of thrust needed to escape Earth’s gravity. The amount of chemical propellant required is enormous; nearly a million pounds for a mission like Psyche. Likewise, we would need to take thousands of pounds of chemical fuel with us into space for additional propulsion to get us all the way to Psyche, be captured into orbit around the asteroid, and then perform science operations, which drives us to even larger launch vehicles and costs many millions of dollars more. 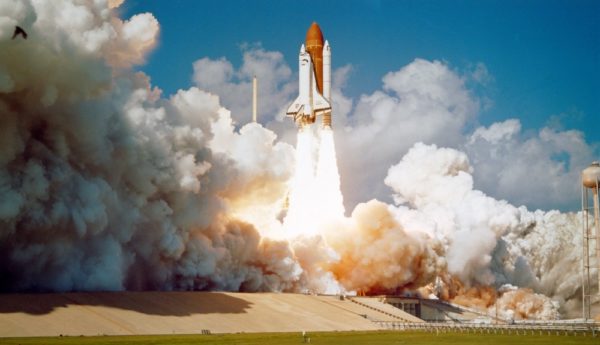 As I described in my previous blog Psyche is an SEP Mission….What’s that mean?, we reduce the amount of propellant we need to take with us into space on the Psyche mission by using Solar Electric Propulsion. Electric propulsion doesn’t burn the propellant, but adds energy to various types of propellant electrically, which increases the Specific Impulse (the thrust per mass used, equivalent to miles per gallon in your car) to reduce the required propellant mass and launch vehicle size (and cost!). We get the electricity from solar arrays. But how do the thrusters convert that into thrust?

Electric thrusters work by accelerating propellant atoms to higher velocities than can be obtained by chemical propulsion. In chemical propulsion, the energy produced is limited by how much energy there is in the chemical bonds of the propellant. The combustion products are heated by the energy released in the breaking of each chemical bond while burning, and a rocket nozzle converts much of that thermal energy into directed particle velocity to produce thrust. The higher the velocity, the higher the specific impulse and thrust from a given amount of propellant. Bored yet? Yea, I don’t like chemistry much either. 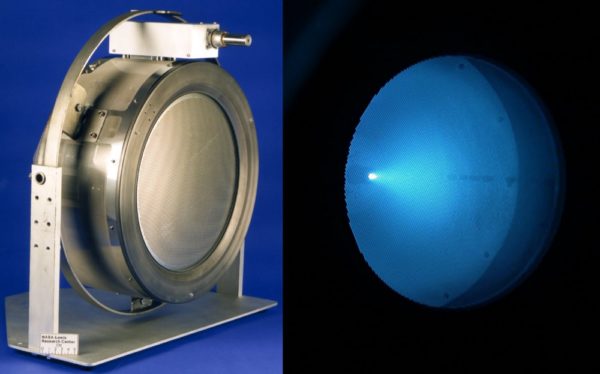 I’m going to start with ion thrusters. We ionize the propellant by injecting energetic electrons from an electron emitter (called a hollow cathode) inside a chamber that is filled with the propellant gas and collects the electrons (called the anode). This is called an electron discharge, and these hot electrons hit the neutral gas atoms and knock an electron off each atom to produce an ion and a free electron. The ion and electron gain too much energy from this process to easily recombine, and so zip around inside the thruster together in nearly equal numbers until they reach the accelerator region or are lost to the discharge chamber walls. This combination of ions and electrons is called a plasma, named by the father of this field, Irving Langmuir, back in the 1920’s at General Electric when he noticed a blue glow sometimes appeared in his light bulbs.

Forty years ago (feels like 100!) I got an internship as an undergraduate in a UCLA lab that was working on improving ion thrusters. We were trying to better contain this plasma using magnetic fields. One week I brought one of these ion thruster plasma confinement chambers to a meeting of all the other interns in this program and proudly described the improved plasma confinement we had achieved in the chamber, when one of the other students working down in the biology building asked: “Why doesn’t the blood just leak out through all those holes in the walls?” I had to explain nicely that our plasma, which is the fourth state of matter and considered the most abundant material in the universe, is not the component of blood that everybody knows about here on Earth.

Back to ion thrusters. One wall of the ion thruster consists of two or three grids biased to very high voltage, typically 1000–2000 V. Ions that reach the grids are accelerated to velocities of over 80,000 mph by these voltages in contemporary xenon ion thrusters. Xenon is the propellant of choice because it’s inert (it doesn’t react with the rest of the spacecraft) and is easy to ionize. Some of the neutral gas atoms are also excited by the discharge and give off the beautiful blue glow we see in the xenon gas commonly used in electric thrusters, and in automotive headlights.

The electrons are left behind when we accelerate the ions away, and the thruster (and the spacecraft bolted to it) would charge up very negatively and arc to the local plasma out in space if this was allowed to continue. We fix this problem by putting another electron emitter outside the thruster (seen at the top in the photo of the NSTAR ion thruster) that shoots out enough electrons to neutralize the charge imbalance of generating our ion beam. This is the first time in my experience that Mother Nature ever gave us something for free because it’s not hard to do this. If you just make some electrons available, the beam draws whatever it needs to neutralize the charge buildup. It does takes power to make the plasma and accelerate the beam, and the NSTAR thruster uses a few kilowatts of power to produce about 0.02 pounds of thrust. That was enough thrust to take the Dawn spacecraft to the asteroid belt because the force of gravity is so low in space and there is no drag. Electric propulsion missions are often called “low-thrust” missions.

Psyche will actually use Hall thrusters, not ion thrusters, but I started with ion thrusters because Hall thrusters are a lot harder to explain. Hall thrusters don’t use high voltage grids, but do use an electron discharge to produce the plasma. In this case, the hollow cathode is outside the thruster and the electron collector (remember it’s called the anode?) is inside. The electrons are very light and fast, and all the power we apply would just go into the electron current flowing to the anode and blue glow if that was all we did. Instead, we apply a magnetic field to force the electrons to go in circular orbits around the center of the thruster. The magnetic field impedes the electron motion to the anode, which allows the ions that are generated in this discharge to be accelerated by the field between anode and cathode. The ions are too massive to be affected by the weak magnetic field, and are shot out of the channel to form the beam and make thrust. This circular electron motion is why Hall thrusters have that annular channel full of glowing plasma you see in all the photos of these thrusters. Since the acceleration happens within the plasma, the ions can drag enough electrons from the discharge with them to automatically neutralize the charge build up that I described above for ion thrusters. 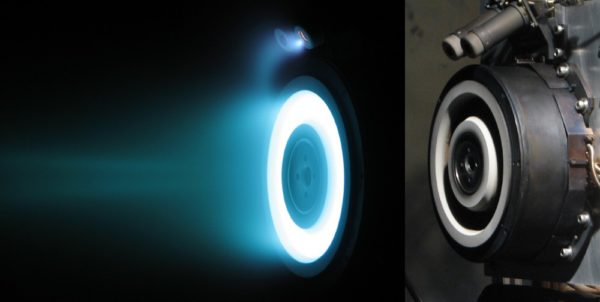 I should mention there is some care and feeding required to use electric thrusters. They need a power supply that converts the electricity from the solar array into high voltage and current required by the thruster. They need a gas feed system to deliver the xenon propellant at exactly the right rate over the life of the thruster. They also need a precision pointing mechanism called a gimbal to point the thruster in the right direction for the desired trajectory. Providing all this requires a lot of engineering to ensure that the thrusters perform reliably over the 6-year duration of the Psyche mission.

In my next blog I will describe what we have to do to make the SPT-140 Hall thruster system normally used by Maxar in Earth orbit work in a deep space mission. There are big challenges to make the thrusters last long enough to get to Psyche (3.5 years), operate reliably in the extreme cold temperatures of deep space, and throttle down to low powers because the available solar array power decreases as we move away from the sun.

1Partial list of some of the different types of electric thrusters

Propellant-less (violating the laws of physics!)