I have been working with Lindy for over four years as system architect for the Psyche mission concept. The idea for the Psyche mission appealed to me from the very beginning. The chance to explore a new type of metal world for the first time struck me as a classic mission of discovery, part of NASA’s long tradition of exploring new worlds and opening new frontiers.

I have worked on several projects at NASA’s Jet Propulsion Laboratory (JPL), including the Curiosity Mars Rover, and before I came to JPL I spent years working on Hall thrusters (a type of plasma thruster — see photo) at a time when they were first being adopting for commercial use. What this means is that for me, the Psyche mission is a perfect combination of exciting new science and innovative engineering using one of my favorite technologies (yes, I have a favorite technology): electric propulsion. Our propulsion system converts electricity into thrust by ionizing xenon gas and accelerating it across a magnetic field. This uses far less propellant than conventional rockets, which get their thrust from chemical reactions and are thus inefficient and impractical for this type of mission.

Taking the idea for Psyche and turning it into a viable mission concept took both effort and innovation, and it didn’t happen in a vacuum. Innovation is a team sport, combining scientists, engineers, designers, artists, writers, managers and others across multiple disciplines and multiple organizations. The team puts in this effort because they are passionate about exploring the solar system, they dream of flying a never-before-flown-mission, and they have, collectively, the skills and the vision to turn an idea into a developed mission concept.

JPL works hard to nurture new missions, and last February, I spoke at the Emerging Technologies (EmTech) conference in Singapore about the process by which we develop ideas into missions. Some highlights:

It truly is a privilege to work with such a remarkable team to build and fly this mission!

View the whole talk on YouTube: https://youtu.be/sDLmqQXk3Zs (or click the video at the top of this page!) 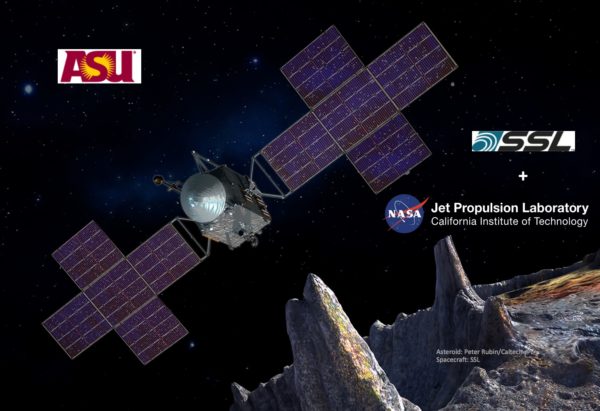 Psyche is a unique partnership that brings together the strengths of JPL and SSL. Image Credit: SSL/ASU/Peter Rubin